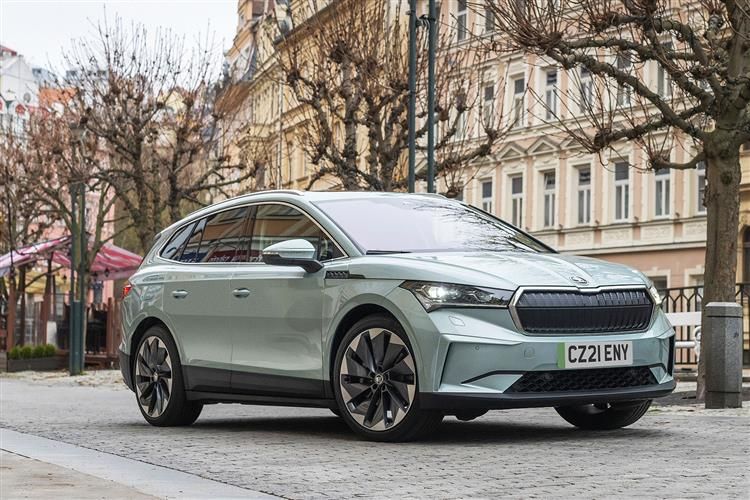 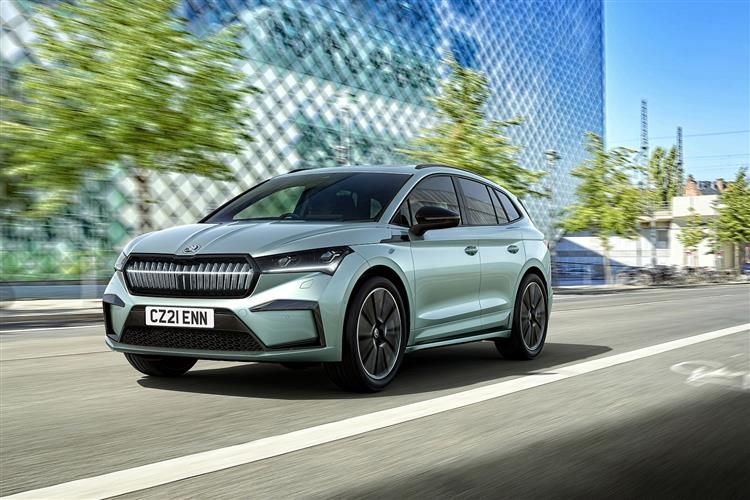 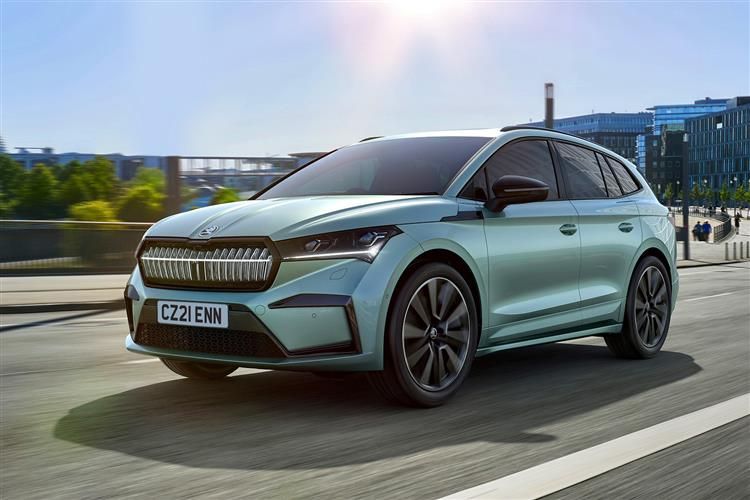 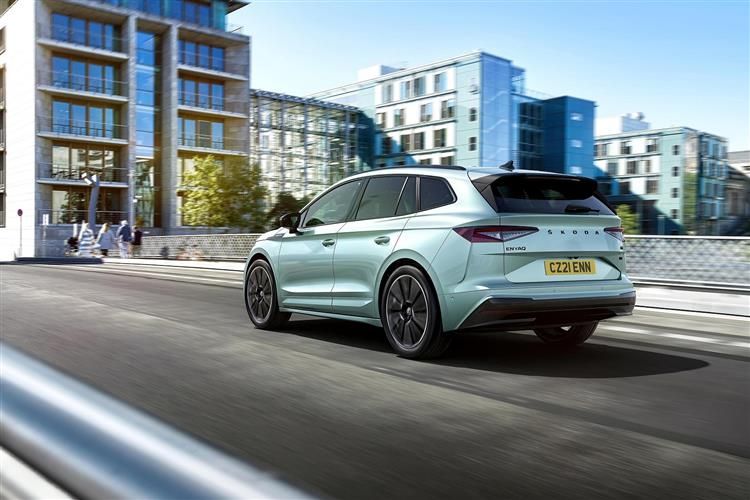 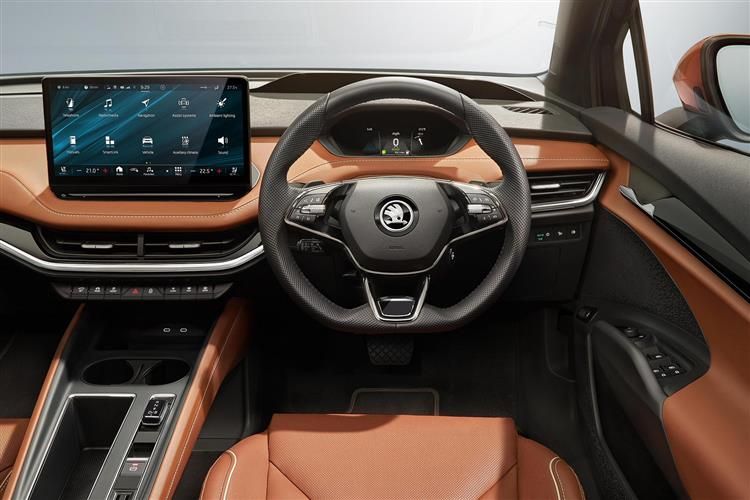 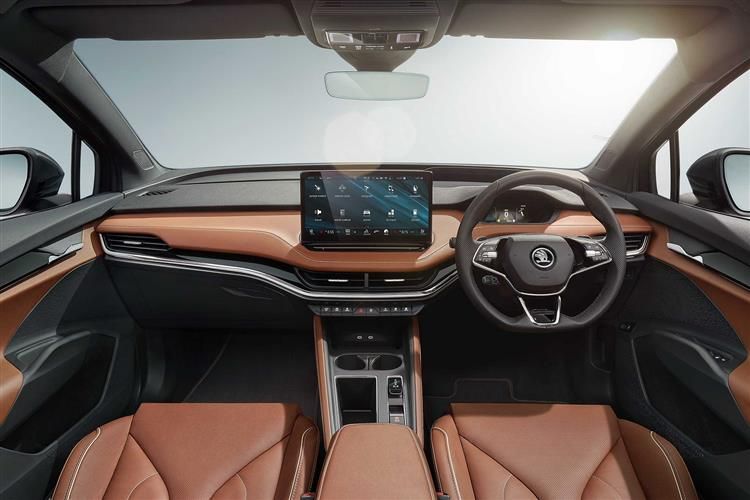 SKODA ON A CHARGE

Skoda embarks on an electric future with this clever Enyak iV. Jonathan Crouch takes a look.

Skoda's first full-electric car, the Enyak iV, uses Volkswagen Group EV technology to good effect. Based around the Wolfsburg conglomerate's advanced MEB electrified platform, it nevertheless manages to incorporate a very Skoda look and feel. And in terms of range, charging stats and equipment, will look attractive in the showroom for those who get the right price or lease deal.

We're told that the Enyaq iV ushers in a new era of design and engineering for Skoda. Perhaps it does. A less charitable way of looking at this latest EV is that it's a Czech take on the same technology also used by its VW Group cousins, the Volkswagen ID.4 and the CUPRA El-Born. Like those two models, this one is a full-electric, 5-door Crossover, larger in size than, say, a Kia eNiro and offering, according to Skoda, almost the same interior space as its own conventional full-size SUV, the Kodiaq, though with the Enyak, you can't have seven seats. Lots is interesting here: the way Skoda dispenses with a traditional trim level hierarchy, instead offering different battery sizes with customers being able to choose different interior 'design selections' spending on their various wants and needs. And the inclusion in the range of a range-topping vRS iV variant, the first time Skoda's performance badge has been applied to a full EV. Let's take a closer look.

There's the choice of two or four wheel drive versions of the Enyaq iV. The rear driven model, the 60iV variant, has a single motor producing 177bhp, helping the car along to 62mph from rest in 8.7 seconds. It's fitted with a 62kWh battery that should produce a total WLTP-rated range of 242 miles. The quicker 80iV derivative boosts power to 201bhp and gets an 82kWh battery, so range increases to 316 miles, whilst the 0-62mph sprint drops to 8.5 seconds. The two top mainstream models, the 80x iV and the vRS, also use the 82kWh battery but add four wheel drive, which means extra weight (hence the a reduction in range to 285 miles). They go a bit quicker though, the 262bhp 80x iV making the 62mph dash to 6.9s and the 302bhp vRS trimming that to 6.2s. The vRS is the only Enyaq iV model that has a top speed in three figures (111mph), the others achieving 99mph. When fitted with an optional folding towbar, the Enyaq iV is also capable of towing trailers weighing up to 1,400kg.

The look of the Enyaq iV moves Skoda into a new design direction, the main theme being most obvious at the front, which can be optionally embellished with an illuminated 'Crystal Face' grille. Full-LED Matrix headlights at the front are joined at the rear by LED tail lights which include dynamic indicators and an animated 'Coming/Leaving Home' function. Measuring 4,648mm long and 1,877mm wide, this car is quite substantial in stature, though it's actually shorter than a Skoda Octavia. Still, thanks to the clever design of the MEB platform it sits on, the Enyak offers superb interior space. With the traction battery housed in the floor and a compact motor mounted beneath the cargo area base, this Czech EV has a cabin unburdened by the packaging compromises of a traditional internal combustion engine car. That cabin is 'inspired by modern living environments', according to Skoda, and uses 'natural, sustainably processed and recycled materials'. The fascia's dominated by a central 13-inch infotainment touchscreen, which can also be worked by both voice and gesture control. There's also a further 5.3-inch instrument binnacle display. A further interior highlight is the wonderfully-named optional 'Jumbo Box', which adds 6.2 litres of storage underneath the centre console. There's comfortable space for a couple of adults on the back seat. And boot capacity is ample at 585-litres.

Prices (after the deduction of the £3,000 Government Plug-in Grant) start at around £31,000 for the base 60 iV Nav variant, which comes very generously equipped with 19-inch alloy wheels, rear parking sensors, dual zone climate control and a 13-inch infotainment screen as standard. All '60' models are equipped with the 'Loft' interior trim which features fabric and artificial leather seat trim and brushed aluminium panels. For an additional £1,285, buyers can upgrade to the interior design pack 'Suite', which adds leather trim and 'Piano Black' decor panels. 'Lounge' is the next pack up, which brings a light grey leather with 'Mustard Yellow' stitching for an extra £1,115. For around £36,000, the Enyaq iV 80 gives customers a greater level of standard equipment, including chrome detailing, front parking sensors and a rear view camera. Also included is a heated two spoke steering wheel that features paddles to adjust the brake regeneration level, 'Drive Mode Selection' and an infotainment system with navigation. This variant runs on standard 19-inch 'Regulus' alloy wheels and as before, there's the option to upgrade to 'Suite' or 'Lounge' interior packs. The range-topping 'Founder's Edition' adds the illuminated front grille with 'LED Crystal face', 21-inch 'Aquarius' alloy wheels and a unique 'black leather interior' as standard at around £47,000. Connectivity is key with the Enyaq iV and all models feature a 13-inch free-standing display screen with optional head-up display, including augmented reality navigation. The car also features a permanent internet connection, ensuring that the information being fed to it is always up-to-date.

We gave you the driving range figures in our 'Driving Experience' section: they're very class-competitive, though, as you would expect, don't differ much from what you'd get in a comparable Volkswagen ID.4 or CUPRA El-Born EV. Sleek, aerodynamic styling (the drag coefficient is an impressive 0.27Cd) along with ample-sized batteries obviously help here. All Enyaq iV models have a minimum DC rapid charging capability of 50kW as standard. Customers can specify higher 100kW (for 62kWh battery) and 125kW (for 82kWh battery only) DC charge rates as options. The Enyaq iV offers customers three charging options. In addition to using a standard household 230V socket with 2.3 kW alternating current (AC), it can be charged at home overnight using a wallbox of up to 7.2kW. Depending on the battery size, the charging process with a 7.2kW wallbox takes approximately 9 hours 30 minutes for the 62 kWh and approximately 13 hours for the 82 kWh battery (both to 100% charge). As a third charging option, the vehicle can be connected to rapid DC charging points with a charging capacity of up to 125 kW. This allows the Enyaq iV 80 to be charged from 10 to 80 per cent in as little as 38 minutes and 35 minutes for the Enyaq iV 60 Nav. The availability of a heat pump option also means that the air conditioning and heating uses less battery power than a high-voltage heater, increasing range over other EVs that don't use this system, especially during periods when the external temperature is much lower. A dedicated app called 'Skoda Connect' allows owners to control the air-conditioning and battery charging remotely.

Here, typically for Skoda, is a very pragmatic take on what a family-sized EV can be. It's the first of the Volkswagen Group's MEB battery-powered models not to be built in Germany, defiantly assembled instead at the Czech maker's Mlada Boleslav factory and sharing a lot of the 'Simply Clever' features of its more conventional showroom stablemates. The inclusion in the range of a hot hatch vRS model is an interesting development and we like the neat interior touches like the optional 'Jumbo Box'. Plus all the key figures with regard to range and charging seem to add up. Pricing though, might make you stop and pause - though that's also an issue with this Enyak's close competitors. Still, if you can afford to make the step into a fully electrified future for your family's automotive needs, here's a key contender. 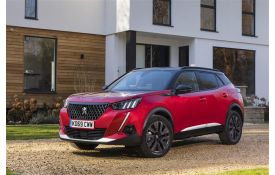 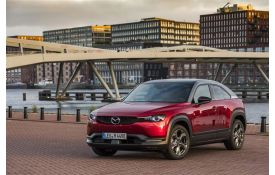 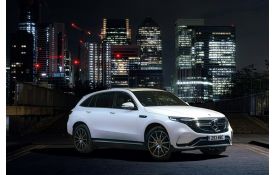